My husband just returned from a trip to Norway. Remember the AmEx commercial where they go to discover their roots in Norway (then find out they are Swedish)? That was basically the plan, except without the Swedish surprise. Mark, his father, and his two brothers headed out to the frozen north to experience the land of their ancestors. (On the Brown Family side -- originally they were "Bruns").

Mark does not eat gluten-free, but it's become second nature to him to keep an eye out for GF options for me, even when I'm not there. He was very impressed by how easy it was to identify GF foods. They were well-marked everywhere he went. In Oslo, he happened to come across Bakefri, the only bakery/cafe in Norway that is exclusively gluten-free. He wasn't looking for it, but it caught his attention. As I said, he's now got a sixth sense for seeking out GF options. Unfortunately, he didn't have the chance to go in (they open at 11 AM and close at 4:30); but as he was staring in amazement (Wow! A gluten-bakery!), a man passing by on the street shouted to him "Best bakery in all of Oslo!" Cool. 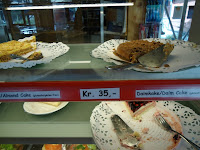 Apparently, exclusively GF cafes aren't really necessary though, as he found well-marked GF options everywhere he went. In Flam, they ate at the Toget Cafe, a pretty little place built over two railway carriages from the 1920's. The picture shows a piece of almond cake, clearly marked as gluten free in English and Norwegian. At the Deli di Luca, Mark's Dad ordered the Pad Thai, also gluten free, but he didn't realize it. In fact, Peter enjoyed his meal without ever knowing that he was eating GF. (Deli di Luca is a chain of deli/ high-end convenience stores, with 25 locations in Oslo, three in Bergen, and one in Stavanger.)

Food was expensive everywhere in Norway, especially in Oslo; so the guys tended to tank up at breakfast, as the hotels usually had all-you-can-eat breakfast buffets. The Thon Opera hotel, right next to the main train station, had plenty of gluten free cereals and breads on the extensive (and free!) breakfast buffet.

Sandy
Posted by Sandy and Cathy at 9:07 AM