On our Baltic cruise trip we spent our first and last nights in Stockholm. The first night we stayed in the Elite Eden Park Hotel, which was located across the street from the park that houses Sweden's National Library. I asked at the desk where we could find a restaurant with good fish and they recommended the Zink Grill which was only a few blocks from the hotel at Biblioteksgatan 5 and very walkable on a beautiful sunny summer evening. The Zink Grill had some outdoor seating available, so we sat outside under a canopy. The weather was wonderful, but I noticed that there were baskets of small blankets, so I suppose that there are some days when the outdoor section is open that are possibly not so balmy.

The restaurant turned out to be more of a meat sort of place, but I ordered the cod dish on the menu with a side of spinach with a Riesling that was offered by the glass. What a simple but great meal! The cod could not have been flakier or tastier. The spinach nearly equaled the Platonic spinach that I had in Mississippi last year. The Riesling was sweet, but complex. Great meal. Great evening.
Our last day of the trip was spent at the Stockholm airport. We had lunch and dinner at the airport. The prices were outrageous, the highest we have ever seen, but I had really lovely lunch at a sushi bar between Terminals Four and Five. I explained to the cashier/waitress that I was celiac and she said that the California roll could be made gluten free by substituting salmon for the crab. That worked. She also brought gf soy sauce to the table for me. I ordered edamame beans as well, and the tea and miso soup were included with the lunch. That was the first time I have gone into a sushi place since my diagnosis and I am so glad that I went there. Europe seems to have a greater understanding of the whole gluten free process. Everyone always knows what I am talking about and what is required.

The evening meal was at the New Orleans Bar, also located in the area of the airport between Terminals Four and Five, but separated by a very long afternoon nap at the Radisson Blu Arlanda Hotel. I looked over the menu and didn't see a lot that I could eat, but there was a shrimp salad that looked plausible. I told the waitress that I had to eat gluten free, and she assured me that the shrimp salad would be okay. I did not expect much. I was pleasantly surprised by a large salad with a lot more shrimp (small but plentiful) than I have seen other places. There was also a poached egg on top of the frisee lettuce. It's the first time I've seen that, but it was surprisingly good. I did not order any fries, but with the assurance from the waitress that their fry basket was dedicated, I ate some off other people's plates, and they were about as good as a fry can get.

Three meals, all different, all gluten free, all really good.

Cathy
Posted by Sandy and Cathy at 2:59 PM No comments:

Somewhere in my travel research, I encountered the word "Reformhaus."  I had the vague impression that it meant "health food store" and that it was a likely place to get gluten free food.  So, when I happened upon a "Reformhaus" in Baden-Baden, Germany, I stopped in my tracks and dragged the family inside.

It turns out that "Reformhaus" is not a generic name, but rather the name of a chain of health food stores, with almost 3000 locations in Germany and Austria.  The location in Baden-Baden was small, but it had an amazing array of gluten free foods, including six(!!!) shelves devoted to Schar products. 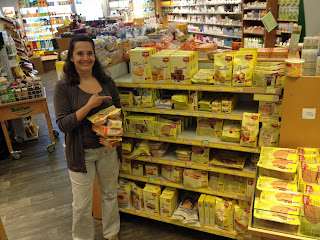 I was like a kid in a candy store.  I bought mostly Schar products, as I know they tend to be pretty good, including some dinner rolls with chocolate chips (wonderful the following morning with Nutella for breakfast). I also got a variety of cookies.  I passed on the chocolate croissants (which looked more like the Pillsbury crescent rolls than a French pastry), but was amazed that such a thing existed.  It was toward the end of our trip, so we loaded up on things that would make good plane snacks.

Posted by Sandy and Cathy at 5:42 PM No comments:

The next stop on our Germany adventure was St. Goar on the Rhine River.  I took a German Civ class in college that focused on the economic and cultural importance of the Rhine in German history, so I knew a lot about this region, but I had never actually been there.  Standing there on the river, I felt triumphant that I had finally arrived to see this beautiful place I had studied.

We stayed at the RomantikHotel Schloss Rheinfels  overlooking the river.  The hotel is adjacent to the ruins of a large and very old castle, and the parts of the ruins have been integrated into the hotel.

We had a great time exploring the ruins and clambering over walls and through tunnels.  This was a place where the kids could run off a little of their energy, instead of me admonishing them to be quiet.

The hotel restaurant, Auf Scharffeneck,  had stunning views and excellent food.  In fact, the gluten free bread they brought me here was the best I have ever had.  It actually had the texture of real bread with a flakey crust.  Wow.

As with the other restaurants, white asparagus was featured prominently on the menu.  (Asparagus season runs from April to July.) Instead of ordering meat with a side of potatoes and asparagus, the menu offered 1/4 pound asparagus and boiled potatoes, and your choice of veal, pork, or steak.  I found it funny to have the meat listed last.  Everyone enjoyed their meal, but the wine was the big highlight of the evening.  We tasted several sweet Rieslings from the nearby Loreley Winery.  They were phenomenal, and we were disappointed to find that they are not available in the United States.

We had breakfast in the restaurant the next morning and I asked them to find some more of that gluten free bread for me, which they did.  Mmmmm.  I had fresh warm bread and nutella.  Yum.  I also had the only decent cup of tea I had while I was in Germany.  I am not sure if the Germans aren't tea drinkers, or they just like it a little bitter. Or perhaps I just had really bad luck.  But they made me a pot of tea here that was absolutely perfect.  The buffet had all the usual things on it... juice, fruit, yogurt, cheeses and meats, and breads.  They also made eggs to order.  It was an excellent breakfast and you just can't beat that view.

Sandy
Posted by Sandy and Cathy at 9:12 PM No comments:

(I must point out that the Grimm brothers did NOT write the fairy tales.  Everywhere we went, the brochures and signs said things like "this is the castle that inspired the Grimm Brothers to write Sleeping Beauty," but that is incorrect.  The Grimm brothers collected and recorded existing tales in the hope of preserving German culture.  They did not invent the stories.)

Pedantic rants aside, it was a fun place to visit, but very out of the way.  Getting there was a challenge and we got lost several times.  Our GPS wanted us to take a road that had a giant hole in it.  (Not a pothole, mind you.  You could have fit four cars inside that hole.) We felt like we had achieved a victory simply by getting there in one piece.

The castle is pretty and they have a fun little garden with metal cut-outs depicting scenes from the fairy tales.  The whole experience was a little campy; our stay at Burg Colmburg felt more authentic, but if you have small children, Dornroeschenschloss is probably the better bet.

The restaurant was beautiful, with big picture windows looking out over a pasture (with black sheep and white sheep!  I had Ba Ba Black Sheep going through my head for days.)

The gold plates on the table were a cute touch.  They were part of the story told in the garden.  The king only had 12 gold plates, so he invited only 12 fairies, even though there were 13 fairies in the kingdom.  The 13th fairy felt left out and cursed Sleeping Beauty as revenge.  Now at Dornroeschenschloss , everyone can eat off golden plates!

We had some fun drinks -- I had a puree of strawberries and white wine.  Mark had a rose-flavored drink.  The butter was also flavored with rose petals.  Are you getting what I mean now about it being campy?  A little over the top, but fun anyway.
Eating gluten free was not a problem here.  They were able to tell me what I would and wouldn't be able to eat, and I had a lot of choices. They even had gluten free bread, though it wasn't very good.  Points for effort though!

I decided on an asparagus risotto.  (White asparagus, of course, which they seem to be crazy about in Germany.)  The flavor was good, but unfortunately,  the texture was a little crunchy.I know risotto is supposed to be al dente, but this was a little too "dente" for my taste.

In conclusion, the experience at Dornsoeschenschloss was fun, but a little too "Disney-fied" and a lot too expensive.  I think it is probably a must do with younger children, for whom the Sleeping Beauty element will be thrilling.  Teens, adults, and honeymooners might do better to skip the long trek into the middle of nowhere and stay at the elegant Burg Colmburg instead.

Posted by Sandy and Cathy at 5:53 PM No comments: