When I was a little girl, my grandmother would visit from Pennsylvania and bring me boxes of Tasty Kake Butterscotch Krimpets.  Since they were not sold in Texas, they were a rare and special treat.  Then, as an adult, I went gluten free, and Krimpets went from "rare treat" to "forbidden food."

Recently, the grocery stores here in Dallas/Fort Worth have started selling Tasty Kakes.  Not just a box or two, tucked in the snack section, but (at Randalls) a whole long row of them in every imaginable flavor.  They are even selling a Tasty Kake version of a Twinkie.  And because they were once rare, every time I see them I think "Oh look!  Tasty Kakes!"  Then I remember I can't eat them.  Sigh.

So today I decided to take on the challenge of creating a gluten free Butterscotch Krimpet.  I think my results were pretty good.  The cake wasn't as oily as I remember the Tasty Kakes being, but that is probably a good thing.  Still, my cakes were nice and spongy, and the butterscotch icing was pretty close to dead on. 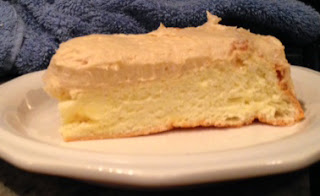 For the cake, I used a sponge cake recipe from Gluten Free on a Shoestring.  My only modification was that I used a square pan instead of round.  Do make sure you oil the pan very well, as this cake definitely sticks.  I suspect that some butterscotch extract might make this recipe even more like the original, but I wasn't able to find any at my grocery store.

For the frosting, I used 1/2 stick of butter, 1 1/3 cups powdered sugar, and a teaspoon of vanilla extract, creamed together.  I then added 1/3 of a cup of butterscotch sauce, which I found in the grocery store with the ice-cream toppings (hot fudge, etc.).  The brand I used was Mrs. Richardson's.  I also bought a bottle of Smucker's Butterscotch Topping, but it tasted a little chemically.

This dessert definitely satisfied my craving, and made a convert out of my husband, who wasn't a huge fan of the Tasty Kake version.  The whole family was fighting over who got the last krimpet!