We just returned from a 10 day student trip to Germany, Austria, Italy, and Switzerland with EF Tours.

My high school daughter signed up to take this trip with students from her school. There are few things in the world I wanted to do less than travel on a cheap-o student tour with smelly teens, but because of some health problems my daughter has been experiencing, I did not feel comfortable sending her alone.  So, voila, I became a chaperon.  My expectations were not high, especially when it came to food.  I anticipated living on Laurabars for a week.

Fortunately, I was wrong.  First of all, EF Tours provides fantastic value for the price.  Europe is expensive.  Really really expensive.  So I assumed that for the price we were paying, we would be staying in rat-traps and eating at truck stops.  Not true!

The hotels we stayed at were clean and quaint.  Not luxury hotels by any stretch, but very comfortable.  Hotels in Europe aren't up to American standards anyway, so things like small rooms and spotty Wi-Fi are to be expected, even if you were paying top dollar.

On to the food!  I had the good fortune to have a tour director who was also gluten intolerant. That was helpful, in that she was already thinking about what food was gluten free, so I was never forgotten; however, she had little to do with arranging the food, so sometimes we were both left with less than stellar options.

Breakfast and dinner were included with the package.  I will talk about those meals first.  Lunch we chose and paid for on our own, and I will cover that in a separate post.

Breakfast was always at the hotel.  Some days there was eggs and bacon, some days just cold cuts, but there was always some type of protein being offered.  Breakfast was obviously the hardest thing for me, especially since I don't tolerate eggs well on an empty stomach.  So I brought some packets of cereal with me from home.  Yay, gluten free Cheerios!  Between that and the fruit and yogurt available at most of the hotels, I was in pretty good shape for breakfast.

Dinners were hit or miss, but mostly hits.  Some days we ate in restaurants, some days we ate at the hotel.  Our first night (outside Rothenberg) we ate at the hotel, Gut Wildbad.  The buffet offered mostly pasta, but also salads (green salads and more traditional German salads with tons of vinegar) and soup.  The broccoli cheese soup was gluten free and delicious.  I also enjoyed the German potato salad.

The next night we ate in a "brewery house" in Munich called Franziskaner in der Au.  It was very crowded that night, as there was a "football" (soccer) match on and the pub was filled to the rafters with cheering fans.  On the table, each person had there own individual mason jar with a vinegar-style salad in it.  I think it was a Rettichsalat (radish salad), but honestly, I only ate a few bites of it.  I am not a big fan of those types of salads.  It was certainly very German, however, and the presentation was cute.

Unfortunately, the meal only went downhill from there.  I got rice.  Just rice.  It had a few little veggies on top, more than a garnish, but not by much.  A couple broccoli florets and a few strips of bell pepper.  I had to laugh.  Like I said, the tour guide was stuck with the same meal, so that took the wind out of my sails as far as complaining is concerned.  I mean, I only have to do this once.  She does these tours over and over again.  Yikes.  There was a dessert custard, but the tour director was unsure about it, so I didn't eat it.

The third night was also in Munich, this time at Muhlbacher an der Au.  I did better here, as I was able to eat the same meal as everyone else.  We had chicken, with rice and veggies, and the chicken was very tasty.  For dessert we had a little dish of strawberry yogurt.  By the way, "Au" is the district in which these two restaurants are located, hence both have "an der Au" in their name.


The fourth and fifth nights, we ate dinner at our hotel M14 in Padova.  I loved this hotel!  I had a huge room with wood floors (I hate putting my bare feet on carpets in hotels.  Ick.) and a nice bathroom.  The teens were all amused by the bidets, which most of them had never seen before. Also, they had the only reliable Wi-Fi we saw on this whole trip.

This hotel does not normally serve dinner, but they had it catered in for us in their banquet room.  The first night they brought me a huge garden salad with shredded pork on top, which was delicious, in lieu of the pasta the teens were eating. 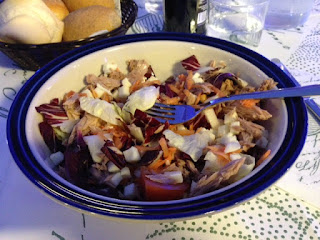 The next night, I was able to eat the same dish as the kids, which was pork and potatoes.  It was very good.  I assume there was a dessert served here, but I was so tired, I asked to be excused early both nights and went straight to bed.

Our sixth night, we ate a our hotel near Lucerne: the Hotel Engel.  This was a really nifty place.  It was very quaint and sweet, nestled in the Alps, looking so picturesque.


The meals we ate there were simple, but tasty.  I can't remember, but I think I ate the same meal as the teens on the first night.  The second night, the kids had spaghetti with a meat sauce, and I had chicken with a side of gluten free pasta.


Our very last meal was in Heidelberg at a local restaurant called Schnookeloch, a fun and historic pub right in the heart of the Old Town.  It was a very upbeat place to end on, and my food was delicious.  I wasn't served the same dish as the kids.  Instead I got a baked potato with meat and salad. (Beef? Pork?  I am not sure, but it tasted good.)  The potato was smothered in either a creme fraiche or yogurt sauce.  I am not sure which, but it was definitely not sour cream.  Either way, it was good.

So for the most part, EF Tours was a win, food wise.  There were several vegetarians on the trip as well, and they were accommodated too, mostly with pasta.  It's not a foodie experience, but for cheap eats on a student tour, they did very well by me.  I would definitely travel with EF Tours again.