Sometimes I have really cool things planned for our regular Thursday date night, but last week I was feeling tired and figured we'd just have a few drinks at the local pub and head back home to watch Dr. Who re-runs.  So I was slightly miffed when my husband came home and said he had big plans for the evening.  I admit, I whined a little.  He was insistent though, and we drove all the way into Dallas to check out a new restaurant he had heard about from a colleague at work.

One of the best things about our relationship is that we balance each other out -- I keep him from being too impulsive and he keeps me from being a stick in the mud.  This was one of those times when he saved me from myself and pulled me (kicking and screaming) into something wonderful.

Rise no. 1 is a French bistro specializing in souffles, located at W. Lovers Lane and Inwood in Dallas.  Usually "French" and "souffle" are not words I associate with being gluten free, so I was amazed that they can and will make (on request) any of their savory souffles and some of their dessert souffles with cornstarch so they can be gluten free. 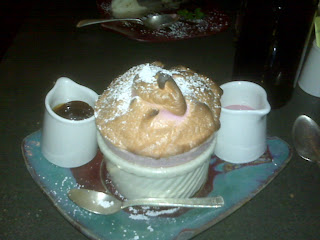 The dining room is very cozy, stuffed with reclaimed objects, such as recycled doors from old homes and temples, antique furniture, and embroidered table cloths and napkins made from vintage cloth.  It's both charming and environmentally responsible.  Neat!

Our meal started with the presentation of the "chariot de fromages" -- a fantastic antique push cart laden with gourmet cheeses.  To be honest, I can't remember the names of the cheeses we tried, but we got a selection of four cheeses to share.  The plate came with olives, pickles, dried figs, quince jam, and candied walnuts, as well as the gluten infested bread, which we declined.   With all those other goodies, who needs bread anyway?  With our cheese course, we ordered a flight of French white wines.  (A flight is a small taste of several different, but similar, wines).

The souffles only take 15 minutes to cook, so we ordered them when the cheese arrived and they were ready for us when we were done with the cheese plate.  I had the Southwest Chicken souffle, topped with a green chili sauce, and Mark had the Jambon and Gruyere (yeah, that's a fancy way of saying "ham and cheese").  We asked that they both be made gluten free so that we could share.  Both were very good, but I liked the ham souffle slightly better.  Maybe it just tasted better because I was stealing it from my husband.

For dessert, Mark had the Raspberry Souffle and I had a molten chocolate cake.  I think the cake was tastier, but the souffle was definitely more fun.

On our way out the door, they handed us each a little card with a saying on it (sort of like a fortune cookie). Mine was a quote from Jerry Seinfeld: "If I was the best man at the wedding, why was she marrying him instead?"  I don't remember Mark's, but it was significantly more profound.

Update:
We went back to Rise the following week (and they remembered us!) with some friends.  This week they had some specials that were not on the menu.  Mark had a Crabmeat Souffle (I didn't try it, as I don't like crab) and I had an Artichoke and Brie Souffle.  It was absolutely to die for.  Oh. So. Good.

Despite being stuffed from overeating on the cheese and souffle, I had to try dessert.  The special was Pumpkin Souffle, and the chef said he had not yet tried making a gluten free version, but he was willing to experiment, if I was a willing guinea pig.  I was happy to oblige, and he sent out a beautifully puffy souffle that was sinfully delicious.  I ate every single bite, even though I had thought I might be too full for dessert.