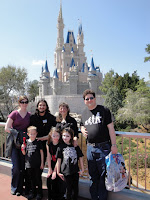 Woo-hoo! We're in Disney World... the happiest place on Earth! We have 8 of us on this trip, so we are staying on the Disney property at the Treehouse Villas. In addition to being large enough for all of us, it also has a full kitchen, which makes it easier to eat gluten free. We loaded up on groceries -- mostly breakfast foods like eggs, bacon, and yogurt.

We arrived in the mid-morning, and by the time we got our luggage, our car, and checked into the hotel, it was lunch time. We went to The Artist's Palette, the counter service restaurant at Saratoga Springs (the sister hotel to the Treehouse Villas). Counter service restaurants are always less than ideal as obtaining allergen information delays the other people behind you in line, but they were willing to make the effort. The menu was mostly pizza and sandwiches, so I was nervous, but the chef told me that they could add any of the pizza toppings to an Amy's cheese pizza and they could make any of the sandwiches using a tapioca roll. I had a turkey and brie sandwich with salad greens. The turkey, roll, and lettuce were all very good, but I think I would pass on the "brie" next time. I was thinking gooey melted cheese. The reality was brie-flavored processed cheese spread. Meh.

After we refueled, we headed out to Animal Kingdom and we were in the park when dinner time rolled around. The children ate turkey legs from a vendor in Dinoland, but the adults chowed down at Flame Tree BBQ. Again, I asked for allergen info. This time they gave me a book that had the ingredients list for all the items on the menu. I ordered the half chicken with baked beans. The food was decent, but the real reason I like Flame Tree is the atmosphere. For some reason, people never seem to figure out that there is a huge seating area behind the restaurant overlooking the lake. It's beautiful and peaceful. Such a nice oasis in the chaos that is Disney World.

Day Two will feature a sit down dinner at Ohana in the Polynesian Resort. Stay tuned!
Sandy
Posted by Sandy and Cathy at 2:54 PM