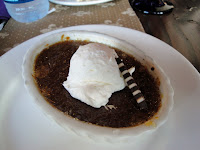 We woke up in our beautiful secluded treehouse on a gorgeous spring morning. The trees were rustling, the birds were singing, and for once we were not rushing to get into a park. Instead, we spent the morning with family -- our Aunt Pat, Uncle Snork, cousin Polly, and their current exchange student Uyen, a lovely Vietnamese girl about the same age as Polly.

We had both breakfast and lunch in our treehouse, which is more a condo than a hotel room as it has a full kitchen. Mark went out and brought home lunch food from the Goodings grocery store at Crossroads Mall. Some info about grocery stores near Disney World can be found here.
He brought home lunch meat, cheeses, fruit, chips, and plenty of soda, so we had more than enough to eat. (I ate the leftovers from this feast for breakfast on our last day.) After lunch, we went to the pool for a while and the kids swam while the adults basked in the sun.

We had a lovely time but had to part ways in the afternoon, as Lani and Caroline had appointments at 3:00 at the Bibbity Bobbity Boutique, a hair salon for little girls located next to Cinderella's Castle in the Magic Kingdom. After they were dolled up, and properly outfitted in princess costumes, we had dinner at Cinderella's Castle.

We were here once before for dinner, and on that occasion we had to wait a long, long, long, long time for our dinner. I am happy to report that we did not have that problem this time. We were served promptly and the chef came out to talk to me right away. For an appetizer, I had the BLT Salad, which is a wedge of iceberg lettuce with a light vinaigrette dressing, garnished with tomatoes, egg, red onions, and bacon. It was a small salad, but just the right size for me. I chose the Prime Rib for dinner which came with potatoes and asparagus. The chef also made a gravy for me. The Prime Rib normally comes with a Cabernet sauce that is not GF, but he cautioned me that they cannot always offer the gravy to customers, as it depends on how much pan-drippings they have on any given night, and how many GF customers come in. I am happy that I was lucky enough to get some as it really added to my meal. I was able to order a dessert from the regular menu, a caramel creme brulee that was very rich and with a strong caramel flavor.

There used to be a dinner show at the Castle, featuring the Fairy Godmother and Cinderella's Mice, but that has changed. Instead, the Disney Princesses arrive and come to all the tables, but there is no show, which is a shame as I thought the old show was very clever and it was kind of nice to see some of the rarer characters. However, the kids got to see all the Princesses, so between Chef Mickey's and Cinderella's Royal Table we saw most of the major Disney characters without having to stand in long lines.
Posted by Sandy and Cathy at 2:03 PM