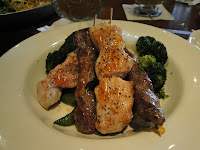 On our second day in Disney, we did something I have wanted to do for a very long time -- we took the Keys to the Kingdom tour. This is a "behind the scenes" tour that takes you down into the "Utilidors" underneath the Magic Kingdom and shows you the inner workings of many of the rides. I learned all kinds of interesting things, which I can't share with you because I took a vow that I would "never ever ever ever tell anyone the things I am about to see, so help me Walt." It's a great tour if you are the sort of person who wants to know how things work.

Lunch was included in the tour and when I checked in, they expected me to give them my lunch order. Yikes. I was very nervous, because normally I would talk to the chef and ask him what was safe, and not only could I not talk to the chef, I wasn't even going to talk to anyone who worked in the restaurant! I had to rely on my tour guide. Needless to say, I was temporarily panicked, but I didn't need to worry. The tour guide had a book with allergen info about everything on the menu. Yea! He even knew that I could substitute GF chicken tenders for the chicken on the salad. That seemed like a good idea, so I ordered that and asked him to make sure it was circled, highlighted and starred with an allergy alert. When we arrived at the Columbia Harbor House for lunch, it was ready and waiting, just like I ordered. It wasn't one of the most exciting lunches I've ever had, but it was quite tasty.

Dinner, on the other hand, was more adventurous. Since my diagnosis, I have been avoiding my favorite Disney restaurant of all time -- Ohana. Ohana is located in the Polynesian Resort hotel and served Hawaiian food, and since "Ohana" means "family," the food is all served "family style." Soy sauce. Shared plates. Nuh-uh. However, on this trip we had eight people in our group, which limited our choices. Ohana was one of the few places that could seat us all at one table, so I called and talked to the restaurant and asked them about allergy accommodations. It turns out that they are fantastic at Ohana. Since there is almost nothing on the menu I can eat (except the shrimp skewers), my entire meal had to be made specially... and it was special! First they brought me my own plate of chicken wings. I'm not normally a wings person, and I started to tell the server to skip that one, but she assured me that I definitely wanted these wings. Sure enough, they were delicious, tender and lightly spiced. I shared them with my brother, a notoriously picky eater, and he loved them. In fact, most of the night he preferred my meal to the "normal" one. The shrimp was brought to the table on large skewers, as were the meats, but since I could only have the shrimp, they brought me my own meal: small skewers of chicken, beef, and pork served on a bed of plain white rice. When I called the restaurant I was told that they had wheat-free tamari sauce, so I asked the waitress if I could get some. She came back with the chef and three kinds of dipping sauces -- plain tamari, terriyaki, and sweet and sour. I normally don't care for sweet and sour, but it was delicious, easily the best of the three sauces. I'm glad I asked, as the dipping sauces really made the meal special. The group's dessert was bread pudding with a caramel sauce, but they brought me a warm brownie with ice-cream. Yummy! 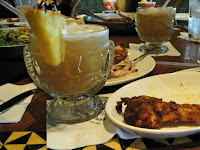 I would be remiss if I didn't mention the Mai Tai. Mark and I had Mai Tai's for the first time on our honeymoon at .... that's right, Disney World! We saw the Polynesian luau show and had their Mai Tai's, which I loved. The Mai Tai at Ohana is very good, but it is far less sweet than the one I had at Chef Mickey's, so it depends on your tastes. Tune in next time for a review of Chef Mickey's on Day 3 of our Disney vacation.
Posted by Sandy and Cathy at 1:53 PM