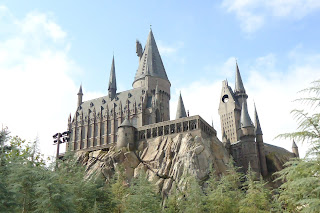 My kids were dying to go to Universal Studios in Orlando to see the Harry Potter attractions there.  We had to be at our cruise ship by 2:00, so we needed to use our time as efficiently as possible.  Guests who stay in the Universal hotels get early admission to Harry Potter -- one hour before they let the masses in.  As I type this, the current wait at the main attraction (Forbidden Journey) is one hour.  (I love this Facebook app that tells you the wait times at Disney and Universal.  So cool.)  Frequently it is even longer, and we were short on time, so we stayed at Lowe's Royal Pacific, one of the three Universal hotels.  According to online reviews, they have gluten free options at the hotel restaurant, but we opted for room service, which we ordered the night before.  To avoid any hassles, I didn't even mention gluten-free.  I just ordered fruit and tea.  Unfortunately, mine was the best meal.  Mark and the kids pronounced the omelets inedible.  So avoid room service and eat in the Islands Restaurant.

So we were off to Harry Potter Land, arriving about 15 minutes before they opened the gates for early admission.  The kids were geared up in the Hogwarts robes -- Caroline was a Gryffindor and Colin was a Ravenclaw.  (By the way, Hogwarts robes are acceptable attire, but they discourage elaborate costumes -- anything that might cause you to be mistaken for a Universal Studios employee.) 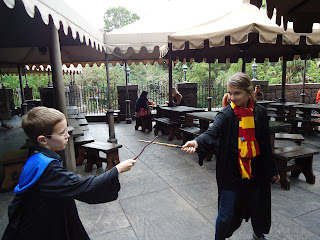 The attraction is amazing.  Just blows you away.  The kids were awestruck.  We rode the Forbidden Journey ride with NO WAIT!  Then the kids and Mark went back a second time and rode it again.  By this time there was a 10 minute wait.  While they rode, I went into the gift shop and bought the photo.  Whoever thought up this idea of taking pictures of people on a ride and then selling it to them as a souvenir was an absolute genius.  We didn't even look very good in the photo and we bought it anyway.  It's like free money for Universal Studios.  Genius.

The biggest highlight of the trip was that my daughter was selected from the audience at the Ollivander's Wand Shop show.  She got to come up to the front and try out wands until one "chose her."  (The wand chooses the wizard in the Harry Potter world, not the other way around.)  Then we had to buy the stupid wand.  They really have amazing talent for separating you from your money.  There was no way both kids were not going home with a wand after that!

When we were done with all of the attractions, we headed over to the Three Broomsticks for some Butterbeer, a cream-soda-ish concoction from the HP books.  Universal Studios advises that the Butterbeer itself is gluten free, but there is strong possibility for cross contamination.  Well, it's not like I'm going to make a regular practice of slurping down Butterbeer, so I went ahead and took the risk.  (Sorry Mom.)  It's BUTTERBEER, for goodness sake!  So worth it!  They serve it either cold or frozen (like a Slurpee) and I preferred it frozen.  For the record, I did not get sick (but we all know that "not sick" does not necessarily mean "not glutened" -- so drink at your own risk.)

The crowds were so light that we were finished with all the attractions before noon and even rode a couple other non-HP rides (a Jurassic Park raft ride and a Rocky and Bullwinkle themed flume ride).  We ate lunch at Mythos in the park.  Mythos has won awards for "Best Theme Park Restaurant," a difficult feat for anyone who is not Disney.  Their website describes the cavernous interier as looking "as if it’s been carved from the rock by the very gods whose images are etched into the walls."  It really does, too!  It's like eating a cave, but a really clean cave with adequate lighting.


I am so glad we took the time to eat in a sit-down restaurant.  It was fantastic!  They had a gluten-free menu and the waitress was very knowledgeable.  I ordered the "Risotto of the Day" which was mushroom risotto topped with shrimp.  I am not a huge shrimp fan, and I asked if they could leave off the shrimp.  The waitress suggested that I substitute chicken instead.  Yea!  I was so happy.  It was absolutely delicious and I ate every bite.