The ship: The Disney Magic 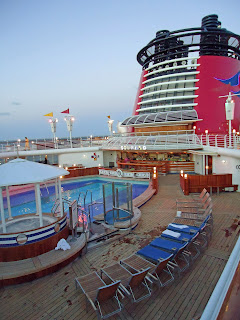 It would take me too long to describe all the wonderful experiences we had on this cruise, so I'll confine myself to describing the food.
Disney has a "rotational dining" system.  You have an assigned dinner time (5:45 or 8:15) in one of their three restaurants, rotating through them so that you eat in each one twice.  Your servers and table number stay the same no matter which restaurant you are in.  So, for example, you eat in Lumiere's on Monday at table 20 with Constantine the waiter.  On Tuesday, you eat at Animator's Palate at table 20 with Constantine the waiter.  Lather, rinse, repeat.
This should be a great thing for a celiac, since you don't have to explain your dietary needs over and over again with each new waiter.  However, my particular servers had very limited English and no understanding of what was in the food whatsoever.  And I was stuck with them for the duration.  Sigh.  To be fair, they were very nice and would have been great waiters had I not had special requirement. 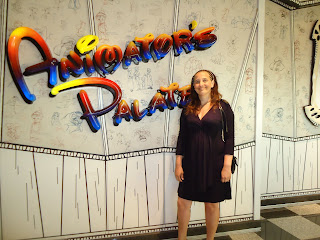 The first night on board, we were assigned to Animator's Palate, which was exciting for me, as that was the restaurant I was most anxious to try.  Animator's Palate is not just a restaurant.  It's part show as well.  The paintings on the walls start out black and white and, one by one, they turn color.  At the end of the evening, Mickey comes out and does a little dance, and the waiters -- who were also in black and white -- are now sporting colors as well.  It was a fun show, and I imagine it was more impressive when the Magic was a new ship in 1998.  It still holds up well. 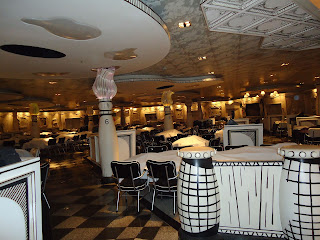 The first night on board, the chefs hadn't had time to prepare anything special for me, so the waiters were instructed that whatever I ordered, it would come without a sauce.  So I had Naked Chicken.  They did, however, have GF rolls (the same kind they have in Disney World restaurants).  For dessert, I ordered off the kids menu -- chocolate pudding.  There was a reason it was on the kids menu, not the adult menu.  It had a layer of pudding topped with a layer of Hershey's syrup, topped with sprinkles.  A little sweet for my taste, but sure to please a kid.
At the end of the meal, one of the waiters brought me the menu for the following night and told me to pick what I wanted and the chef would make it GF for me.
So, the next night was Parrot Cay, a Caribbean-themed restaurant.  It happened to be formal night, and we were all dressed to the nines, and contrast of the wild tropical decor and the tuxes was kind of funny.  The lamb, which I chose the night before, was fantastic.  It was served with a scalloped potato dish and had a nice sauce.  Yea! 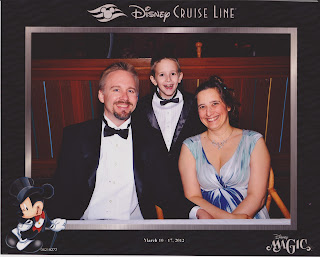 The third night was dinner at Lumiere's (named after the Candlestick in Beauty and the Beast), which is their French(ish) restaurant.  My dinner (chosen the night before) started with a really nice avocado and orange salad (mine was missing the avocados and had to be sent back, but we got it all straightened out).  I had lamb again, since it was such a success the previous night, and this time it was served on a bed of polenta.  I was happy with my food, and my husband felt Lumiere's had the best food on the ship.  However, it was really really loud in there and we were seated right next to the waiter's station, so there was lots of hustle and bustle.  I was feeling overwhelmed, so we left, forgetting to order my meal for the next day.  Oh, no!
It turned out not to be a big problem.  I simply had to go back to the "no sauce" policy.  I had prime rib (naked, of course), but it did have a grilled tomato and some little sweet potato croquettes, which was nifty and different.  At this point, we had begun our second time through the rotation.  Animator's Palate only does the whole show (with Mickey) on your first time through the restaurant.  This time, colors came and went, but there was no show.  The kids still thought it was fantastic and would yell out --"look, now Ariel's lit up!" and so on.
The second time through Parrot Cay, I was a little sea-sick, which is a shame  because the Caribbean chicken I ordered was fantastic.  I worried that it would be too spicy, but not to worry.  It was flavorful, but not hot.  Sometimes I forget that when I'm not in Texas, spicy doesn't mean "burn your tastebuds off."  I can take a fair bit of heat, but Texans begin having jalapeno-eating contests when they are toddlers.  But I digress....
The second time through Lumiere's was just as noisy.  That night was the "semi-formal night" and we were dressed up again.  The ambiance at Lumiere's seems more appropriate to formal attire, so that was nice.  I had a fresh fruit cocktail and an asparagus risotto.  I normally love risotto, but this one was made with a really strong cheese and was a little under-cooked.  It was the only thing I ordered on the ship that was a total flop.  Since I wasn't eating my dinner, I decided to get dessert.  I had been avoiding the dessert out of a desperate desire not to gain too much weight during this vacation, but it was time to splurge.  I was told that I couldn't have any of the desserts on the menu, but that the chef would make me something "special."  The dessert was a mocha mousse cake and it was tasty, but I don't really like the idea of not knowing what I am getting until the waiter puts in down in front on me.  Part of my "control-freak" nature, I suppose.

The last night of the cruise, we were back at Animator's Palate for the final meal.  The menu was appropriately titled the "Until We Meet Again" diner.  I had ordered chicken satay, mostly to see what they would do, and I was impressed with how good they were.  They were pan-fried in olive oil with some spices and served with a mint/yogurt dipping sauce.  I also had a potato leek soup, but it was a bit watery.  For my main course, I had steak. Thus concludes the seven night dining adventure on the Magic.  "But wait," you say.  "You only covered dinners in the main dining rooms and not the other meals."  True -- but that is a post for another day.
Sandy
Posted by Sandy and Cathy at 10:15 PM