In the previous post, I described the rotational dining system on the ship and the dinners we ate on the Disney Magic cruise ship.  Lunch and dinner are more "free-style" and you can choose from a number of options.

The one exception is the Character Breakfast, which is at an assigned day, time, and place.  The character breakfast always takes place on the morning AFTER you eat at Animator's Palate for the first time.  It's a lot like the character breakfasts offered at Disney World.  The characters come around to the tables to sign autograph books and have their pictures taken with the kids.  There was a number of choices on the menu, and I chose to have the scrambled eggs served with grilled ham and pineapple.  They served it with the same GF rolls they serve at dinner.  It was a pretty good breakfast, although the orange juice was pretty watery.  I think that it just wasn't stirred enough before they poured it, as it was fine for all the other breakfasts I ate on the ship.  Obviously the highlight isn't the food, it's the characters.  The kids loved seeing Mickey, Minnie, Goofy, and Pluto, and the waiters made funny hats for everyone out of napkins. It's definitely a "don't miss" event.
On shore-days we ate fast breakfasts.  I usually had a banana and a strawberry smoothie at Goofy's Galley, a pool-side snack stand.  Top-siders and Parrot Cay also had buffet breakfasts (Parrot Cay was only open for breakfast on shore-days), but I chose to avoid them rather than wait for a chef to go through it with me. On at-sea days, we ate at the more formal restaurants, since we had plenty of time.  Lumiere's is the only "a la carte" option for breakfast, unless you have a reservation at the adults-only restaurant Palo's.  In the mornings it was quiet and we were finally able to enjoy it's lovely ambiance.  (At dinner it was terribly noisy and crowded.)  The menu had a lovely french toast dish that made me wish I could eat gluten, so I asked the chef if he could make it for me with GF waffles, which they did.  Between the waffles was grilled pineapple and it was topped with a maple-glazed fruit salad.  Yum!  They were the kind of waffles you buy in the freezer section, so I'm sure it would have been much better with french toast, but at least I had a semblance of the real thing.

We also had a brunch at Palo's, the adults-only restaurant.  This was the best meal of the entire trip!  Palo's did a fantastic job of making sure I had plenty of GF food to eat.  The chef came out to talk to me and we started with buffet appetizers, which featured a number of GF offerings, including fancy cheeses, shrimp, crab claws, humus, grilled tomatoes, asparagus, and hard boiled eggs.  Delicious!  There were also lots of olives and pickled vegetables. The only pickled item I tried was the pickled artichoke hearts, which were excellent despite the fact that I usually avoid things that are pickled.  (This is dietary finickiness on my part, not gluten-avoidance.)
We then moved on to the main course, which was made to order.  The chef made me Eggs Florentine with Udi's toast, which was cut into a pretty little circle to mimic the more traditional English Muffin.  Hooray for Udi's!  It was topped with sauteed spinach, poached egg, and a white sauce specially prepared for me with corn starch instead of flour.  He even brought me a side order of Udi's toast.  He mentioned that they can also do their breakfast pizzas with a GF crust, but he didn't recommend it as the crusts simply aren't very good.  I appreciate honesty like that.

There was an amazing dessert buffet with several choices available for me.  I chose a panna cotta with mango (very good), white-chocolate dipped strawberries (who can resit that?), and a chocolate pots de creme (not particularly good).

Palo's is an "upcharge" restaurant.  Unlike the other restaurants on the ship, you pay a fee for eating there.  Brunch was $20 per person, and the price included one mimosa (champagne and orange juice).

We ate one additional meal at Palo -- afternoon tea.  Unfortunately it was not as big a success.  It was probably not the wisest action to even attempt something like afternoon tea, which is usually a gluten-fest; but I was over-confident after the fabulous brunch they served me.  The big problem came down to the fact that there are no chefs on duty during afternoon tea.  They prepare the meals ahead of time, and the waiters just serve them.  There is no one available to make special requests to.

They knew in advance that I was coming, and the chef did prepare some sandwiches for me.  They were not on Udi's bread, but on two different breads -- a white bread that I didn't recognize and a brown bread that I think was Food For Life brand brown rice bread.  It was untoasted, and as we are all aware, unless it's Udi's, gluten free bread pretty much has to be toasted to be edible.  I ended up eating the fillings out of the bread with a fork.  Still, the meal could have been salvaged at that point.  I can forgive yucky GF bread.  Most GF bread is yucky.  But at that point the waiter told me that he had nothing for me AT ALL for the other two courses.  I protested.  The second course was supposed to be scones with jam and clotted cream.  Now I never expected GF scones, but they served me those darn tapioca rolls at every single meal and I'd had Udi's toast at Palo's the previous day.  I asked him to find me rolls or toast to eat my jam and cream with.  He reluctantly agreed and finally came out with a GF roll (not properly warmed up, it was frozen on one side and warm on the other), but at least he figured something out.

He didn't intend to give me any dessert either.  The dessert plate he brought my husband had the white-chocolate covered strawberries I ate the day before, but he didn't have any extra for me.  Luckily, he was willing to share.  I'm fairly certain the triffle was also GF (though I wasn't going to risk it) as it was just strawberry compote, custard, and whipped cream.  It didn't seem to have any cake or ladyfingers in it.  If so, why didn't the chef put one aside for me?  He finally went and scrounged up a lemon sorbet from the freezer. 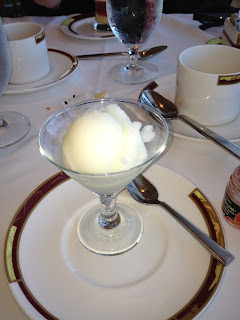 I felt bad for the guy.  He obviously wasn't supposed to have to do anything but bring the pre-set dishes out, and there was no one for him to turn to.  There apparently no chefs, managers, or anything in the restaurant.  So the guilt falls on the chefs who failed to prepare something for him to serve.

As I said before, afternoon tea is a hard thing to do gluten-free, but they had things on hand that they could easily have substituted, so they really should have been able to do better.

For the record, the afternoon tea is also and "up-charge" meal.  It's ten dollars a person, well worth it if you aren't gluten free, but I think this one is best avoided by celiacs.