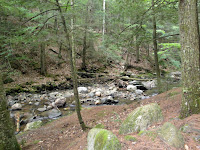 This morning it was a little hard to pull myself out of bed, but I reminded myself that a) I really enjoyed Stretch class yesterday and b) I actually paid money to do this. So off I went to the 7 am Stretch class, followed by breakfast.

They served breakfast burritos (on CORN tortillas) filled with scrambled egg. There was a side of salsa and a side of beans. The burritos were delicious, especially with the salsa, but the beans left a lot to be desired. They were a bit "al dente" which is a word that should never be used to describe beans. I only ate a bite of them, which is really a shame because there are so many really wonderful low fat ways to prepare mexican/ refried beans, but these were a little sweet and definitely too crunchy. The fruit cup was grapefruit and bananas with coconut flakes. The coconut was a nice change of pace.

Our morning hike was 5 miles along the Appalachian trail, with a stop at a pretty waterfall. On our return, we had carrot ginger soup, which was served warm and was reminiscent of a cream of tomato soup. Then we had a tabbouleh salad made with quinoa (this is what they served to everyone, and it was gluten free) with a side of goat cheese and crackers. Since I couldn't eat the crackers, they had substituted a side of hummus. Goat cheese without crackers was too strong a taste for me and I didn't eat much of it.

In the afternoon, I couldn't take it anymore and snuck out to the store. I bought a bottle of Vermont wine (Snow Farm winery's Rose Red) and some Vermont cheese (Cabot's Tomato Basil Cheddar). I had a box of Mary's Gone Crackers in the car and I decided to spend a few hours relaxing with some wine and cheese and a good book (The Autobiography of Santa Clause by Jeff Guinn). Screw pilates.

When I got to dinner, they had thoughtfully noted on the dining board that they only item on the menu that was not gluten free was the salad dressing (which contained tahini). I ordered the combo plate, which is a smaller portion of the meat entree with a small portion of the vegetarian entree. The meat dish was chicken stuffed with spinach and feta cheese (very good) and the veggie entree was a red pepper stuffed with a pilaf made of brown rice, quinoa, and millet (delicious). It was served with some steamed zucchini and yellow squash (a bit limp). Dessert was fascinating, if not particularly tasty. It was a frozen banana puree. The only ingredient is banana, so it was remarkable how similar the texture was to real ice cream. They drizzled it with a tiny bit of chocolate sauce and an almond on top. I think it would have been better with more almonds, especially slivered instead of one whole. I ate about half of it.

My stomach has felt great since I got here. I think that the combination of no gluten cross-contamination, no fats or processed foods, increased roughage, and lots of exercise has been great for my digestion. Of course, it's a lot easier to put this into practice when someone else is cooking your meals for you. Still, I have gotten some good ideas on how to improve our diet once I am back at home.

Cross your fingers that I make it through yet another hike tomorrow morning! Sandy
Posted by Sandy and Cathy at 6:40 PM