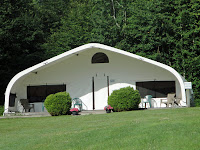 This photo is of the tent where the morning Stretch class and afternoon exercise classes take place.

I made it to the 7 am Stretch class this morning (go, me!) and had my usual scrambled eggs with the tapioca tortilla. I keep forgetting to ask for salsa on the side, but they bring it once I ask.

This morning I chose the "Walk and Cook" activity instead of one of the hikes. We took a 3 mile walk around the surrounding neighborhood, staying mostly on sidewalks and residential areas. There were a quite a few hills so it turned out to be a pretty good work out, but much gentler than anything we had been doing. After the walk, we watched our instructor Janet do a cooking demo. First she juiced some carrots, oranges, pineapple, and ginger for us to drink. It tasted like an Orange Julius to me, probably because it was frothy. Yummy!

Then she made a what she considered a "burger" out of sunflower seeds and rice. I liked it. It was quite tasty. But I think the word "burger" should be avoided as this resembled a burger only in shape. However, as a Sunflower Croquette, it would make a nice side dish. Here's the recipe:

Blend in food processor, until blended but not mushy. It will need to be sticky enough to make a patty, so add a little water if needed. Form into patties and brown in a skillet with a small amount of oil (she used safflower; I would use olive oil). Serve hot.

We only got a small taste (they are still watching our calories for us) so I was glad when lunchtime came around. Lunch is always a soup, followed by a small entree. Today the soup was French Onion (a little sweeter than I would have expected) and a chicken Caesar salad. The waitress remembered me today and brought me mine without croutons. I didn't even have to ask. Yea!

Dinner was a special treat. All day there had been rumors that there would be steak served that night, but I pretty much assumed it was about as likely as a suprise excursion to Burger King; however, when dinner came, there it was on the menu. Steak! It was a small filet, the size you are SUPPOSED to eat -- the size of a deck of cards. It has a beefy sauce that was very nicely seasoned, and the meat was served medium rare. The meat was slightly tough, and I'm not sure if that was because of the cut of meat or because it was slightly less rare than I am used to eating, but it was good. It was served with perfectly steamed snow peas and quite possibly the best corn I've every eaten. Since I had eaten so much, I "virtuously" skipped dessert -- a fruit cup. LOL

Overall, I have been really happy with the food here; a surprise, since I do have a few "food preferences" and I've had to eat a few things I wouldn't eat at home. They do say that hunger is the best sauce.

Sandy
Posted by Sandy and Cathy at 2:13 PM