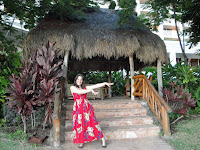 Aloha! I just returned from beautiful Maui!!! Mark and I went to Hawaii four years ago and stayed on Oahu at the Hilton Hawaiian in Waikiki. It's amazing what a difference four years makes. On our last trip, I was miserable, unable to find food, and getting "glutened" at least once a day. Four years later, the world has heard of Gluten Intolerance, even in the far-reaches of Hawaii.

We were staying at the astoundingly beautiful Grand Wailea resort. In many ways it was similar to the Hilton Hawaiian Village on Oahu, but far more elegant.

The hotel breakfast buffet gets high marks from me: they had gluten-free cereal (Gorilla Munch) on the buffet! Not "we can get you something from the kitchen." On. The. Buffet. They had a yogurt parfait station, so I used Gorilla Munch instead of granola, and added nuts and dried fruit.

The hotel restaurant Humuhumunukunukuapua'a was not as easy. However, they did manage a salmon entree for me, eliminating the sauce that normally comes with it, and substituting a citrus butter sauce. The restaurant was soooo expensive though, that I really felt that they could have done better than a piece of nearly naked salmon for $40. But then, at those prices, I might have felt that way, even if I wasn't gluten free. 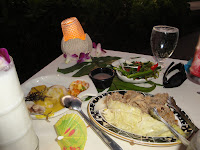 We ate at a luau in Lahaina -- The Feast at Lele. This was incredible. Regarding the show itself, I've been to two luaus in Oahu, and the one at Disney World, and this was in a different class all together. Food wise, they could not have been more accommodating. I had told them I was GF when I made the reservation, and when I checked in they immediately said "which of you is gluten free?" I didn't need to remind them. They were all prepared for me. Every course that came out, the server either told me it was safe for me, or brought me a separate entree. Even Disney has never impressed me this much, and they are my standard for Gluten Free Accommodation. And the food was delicious. We were so full, we didn't even eat dessert, for fear of exploding. 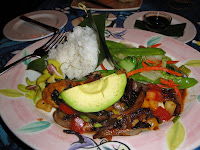 The other big win in Maui was Mama's Fish House on the north shore. Many years ago, I read about Trader Vic's restaurant, and I thought it sounded so cool. When I finally got to go to a Trader Vic's (in Washington, D.C.) it fell short of my expectations. Mama's Fish House was everything I had wanted Trader Vic's to be! The atmosphere of elegant Hawaiian kitch is hard to pull off, but they did it so well. They were also very knowledgeable about gluten, and knew which entrees were safe. The server even brought me some wheat-free soy sauce (tamari) on the side! After mooning over my husband's terryaki meals for days, it was so nice to finally have some soy sauce. I had Opa, a very meaty fish that is almost like chicken. It was fabulous, and the presentation was beautiful. It was like a work of art. I also had a Lava Flow, which is a pina colada with strawberry syrup drizzled down the side. It was delicious, but more importantly, the server went way way out of her way to ensure it was gluten-free. She and the manager actually went out to the freezer to find the original packaging as the bar didn't have the ingredients list. I hadn't even asked if it was GF. They just took it upon themselves to ensure it was safe for me. They earned my everlasting affection for that!

I also need to mention Joy's, a little health food store in Kihei (west side of Maui). After so many rich meals, we were relieved to find this little oasis of "normal food." When people talk about "homestyle" cooking, they usually mean fried foods (at least here in the South). But the food my mama made was never chicken fried steak. We ate low fat, low salt, with lots of veggies. So for me, this was "homestyle." Mark had a turkey and avocado sandwich. He had it on bread, but it was also available in a rice wrapper or wrapped in kale, both great GF options. I had vegetarian chili with tortilla chips. I tasted their soup of the day, which was potato (very good) and they also had smoothies, so there were lots of good choices for the Traveling Celiac.

Sandy
Posted by Sandy and Cathy at 5:11 PM