When choosing which luau is right for you, you have to look at what it is you want to get out of it.
If your top priority is top-notch gluten free food, the Feast at Lele on Maui is where you want to be.
However, if you are a) on Kauai, not Maui or b) looking for a luau that is fun for the whole family, you are better off with the Smith Family Garden Luau.

My kids absolutely loved this luau.  The dancers are clearly not as talented (or attractive) as the extraordinary performers a the Feast at Lele, but the production value is wonderful.  Shooting fire, volcano goddesses, loud noises and getting to watch the kalua pig getting dug up out of the ground in front of you... these are things a kid can appreciate.

The first part of the luau is a tram ride through the extensive gardens.  The kids enjoyed seeing the flowers and animals, including free roaming peacocks. 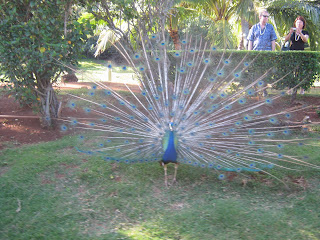 After the tram ride, comes the Imu Ceremony, then we moved on to the food.  The food is very kid friendly.  The food is served from a buffet, so the kids have the opportunity to decide what looks good to them.  They serve Hawaiian Punch.  They have pineapple jello on the dessert buffet.


Mom and I were given "special plates" which the servers had to go fetch for us.  It had gluten free versions of their chicken, fish, plain rice, and sauteed veggies.  The server also told us we could go to the buffet to get things from there that were gluten free, such as the salad and fruit.  They brought us an allergen card that showed which items on the buffet contained gluten.

The food was Perfectly Adequate.  Good, but not great, but there was plenty of it.  I did go to the buffet and get a few items, but I mostly stuck to the pre-prepared plate, as I was worried about cross-contamination on the buffet.  I did try the coconut pudding -- a favorite of mine -- and it was very nice.

While we ate, a band played Hawaiian music (after a grace, said in the Hawaiian language) and many couples danced.  After the children finished eating, they went out and played on the beautiful grounds.

Then, they moved the whole audience to another pavilion, where the performance was to take place. As I said before, the show was fun and family-friendly with neat special effects, including Pele rising from the volcano and a fire dancer.

The children had a great time, and the show ended about 9:15.  A good time was had by all.

On a side note, this is NOT the luau that is offered through the Pride of America.  That luau is called the Luau Kalamaku and it takes place at the Kilohana Plantation.  We chose to do the Smith Family Luau instead, but I should note that my letter from the Dietary Restrictions guy on board the ship included a list of gluten free options at the Luau Kalamaku, so obviously they are also able to accommodate gluten free too.