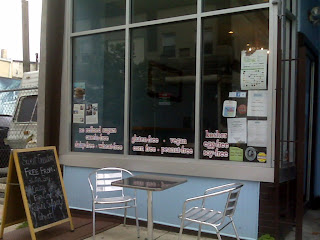 We flew into Philly on our way to visit family, and had just a few hours to see the sights before we had to drive up to Selinsgrove.  We drove downtown and took the kids in to see the liberty bell, then walked to Franklin Square where we played mini-golf on a Philly-themed course (with miniature versions of the Love sign, the "Rocky" steps, Freedom Hall, etc.).  Then we swung by Sweet Freedom, a gluten free bakery in downtown Philadelphia.
We were very tight on time, so I pretty much ran in and ordered one of everything they had and took it to go. This gave us some fun munchies for the very long car ride ahead.  The kids particularly enjoyed ranking the goodies -- they may have seen too many episodes of Chopped.   Here's a breakdown of the winners and losers.
I got three cupcakes -- Hostess-style cream filled, chocolate, and mocha.
The Hostess Cupcake was awesome.  I am plotting my next trip to Philly to get one I don't have to share.
I didn't get a bite of the chocolate cupcake; but my nephew declared the frosting to be delicious.  He wasn't so wild about the cake part, but he ate it, so it can't have been too bad.
The Mocha Cupcake, however, was a disaster.  The filling was thin and watery and oozed all over the place. The frosting tasted like they creamed butter and flour together instead of butter and sugar.  (A look at the ingredients proves me correct -- except they use no butter, so they creamed together rice flour and coconut milk.)  I didn't actually taste any mocha.
I tasted samples of their chocolate chip cookies at the store... yummy.  I only bought one type of cookie -- the double chocolate chip -- which was a big hit with all the kids.  I actually bought three of those, and they were disappointed I hadn't bought more.
The cinnamon doughnuts were VERY good, but more like a doughnut shaped coffee cake than an actual doughnut.  They were also better the day I bought them.  I bought several, thinking that they kids would like these a lot (they didn't) and the next day the cinnamon topping was melted to goo.  Still edible, but not as good as they were when they were fresh.
There was also some sort of vanilla treacle bar (I can't remember what they called it, but it was a bit like a shoo-fly pie) that was interesting, and a blueberry crisp with oatmeal that was pretty good too.  The brownies, however, were declared inedible by everyone in the car.
I saved the piece of zucchini loaf for my breakfast the following morning, and that was a nice way to start the day.  I don't think the kids would have liked it, but I did.
I am so happy we took the time to stop here and that we tried so many different things.  It was a really fun adventure.
Sandy
Posted by Sandy and Cathy at 10:44 AM