When I asked the kids what they wanted to do while we were in France, they said "eat French food!"  So I wanted to make sure we had at least one meal in a fancy French restaurant.  However, my niece Lani (age 12) was with us, and she is not as adventurous an eater as my kids.  In addition, none of the three are really suited for the lengthy three-to-four hour dinners customary in France.  They are well behaved kids, but they are still kids.

I researched a lot of places looking for something that could meet all our needs: gluten free options, kid friendly options, service that isn't terribly slow.  I was losing heart until I stumbled upon Auberge Nicolas Flamel!

Nicolas Flamel was a fourteenth century alchemist whose home (which is now a restaurant) is the oldest stone house in Paris.  He was also a character in the Harry Potter books.

The latter reason is why I knew the children would be terribly excited to eat there.  In Harry Potter and the Sorcerer's Stone, Nicolas Flamel is still alive, having invented the Elixir of Life, which he used to make a stone that would keep him and his wife Perenelle immortal.  (The real Nicolas Flamel did have a wife name Perenelle and there is a street named after her in Paris.)  In the book, the evil Voldemort tries to steal the stone to gain immortality, and Flamel decides to destroy the stone and accept his (and his wife's) death as the price that must be paid to keep the stone out of Voldemort's hands.

When I told Colin we would eat at Nicolas Flamel's house he joked "will he be there?"  I reminded him that Flamel died in 1992 (publication date of the Harry Potter book) and therefore couldn't be there.  Duh!


Auberge Nicolas Flamel turned out to be the perfect choice.  Not only were the kids reeled in by the Harry Potter connection, but they also loved the food.  For Lani, who likes her food to be relatively plain, they made her a "Harry Potter Special," explaining that the chef would prepare something suitable just for her.  They brought her a chicken breast served on a bed of pureed sweet potato, which she pronounced delicious.  Somehow they made her feel really special at getting a custom meal instead of being made to feel like she was being difficult.  I thought that was awesome.


I was able to have most of what was on the set menu, with only a few substitutions.  They brought out an amuse bouche served on a slab of slate.  It had three components: a chestnut foam (insanely good), pistachio goat cheese, and a cube of "smoked" salmon with mustard sauce.  I have "smoked" in quotes because it was a hair's breath away from raw.  I am not normally a fan of sushi, but it was pretty darn good.  The fish was actually a substitution.  The rest of the family had a croquet of fish (not salmon, but I don't remember what kind) which my son has put on his list of Most Delicious Things He Has Ever Eaten.  (#3 behind Veal Cordon Bleu in Switzerland and Kalua Pig in Hawaii.)

The appetizer course was a poached egg with asparagus.  So simple and yet so so good.

The entree was chicken stuffed with goat cheese, served with a demi-glace and sweet potato puree. 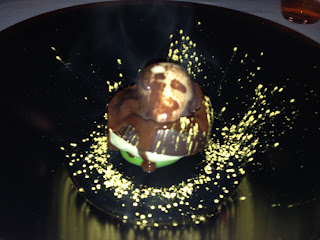 Our dessert was a both visual and gustatory triumph.  They brought us each a bowl with a chocolate sphere, sprinkled with gold dust.  (Alchemists turn things into gold, including desserts!)  Then, in front of us, they poured a pitcher of chocolate sauce over the sphere, melting the top of the chocolate away to reveal the treats inside: a layer of pistachio ice-cream, raspberry sherbet, vanilla ice cream, berries, and caramel.  Wow!  It truly was magic!