GF in the Village of Wick

There are a number of unrelated Rose and Crown pubs, including one in Epcot, but the one we ate at happened to be in the village of Wick in Bristol.

We chose to stay at the Toghill House Farm, a great Bed & Breakfast in Wick (read: the middle of nowhere), as it gave us a good launching point for both Cardiff (to the west) and Bath (to the south).  The children loved the farm with its chickens, sheep, and horses, as well as lots of friendly dogs, but your dining choices are somewhat limited in Wick.  Fortunately, we had two great meals at the Rose and Crown pub just a few miles down the road from the farm.  Amazingly, they had numerous gluten free options. 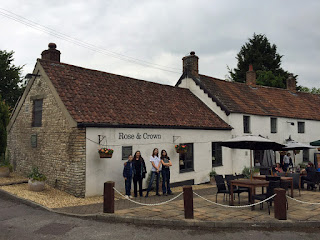 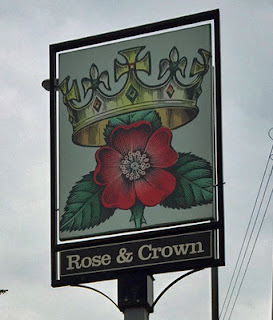 The first night I had a hamburger on a gluten free bun.  The burger was overcooked for my tastes, but the chips (steak cut french fries) were excellent. There were a number of gluten free dessert choices as well and I tried the apple blackberry crumble, which was very good.

The second night was Sunday, and they were serving the traditional Sunday Roast.  The Rose and Crown in Wick was a rarity, in that they offered a gluten free Yorkshire pudding.  Yes, you read that correctly.  I had roast beef, with gravy and Yorkshire pudding in a real English pub and it was gluten free.  Amazing!  The meat was tender and delicious, and the gravy was excellent.  Sadly the Yorkshire pudding was overcooked and dry, but MAJOR brownie points for the effort, guys!

For dessert I had Eton Mess, a jumble of fresh strawberries, whipped cream, pieces of meringue, and a raspberry coulis.  Wow!  This is my new favorite dessert and I plan on making it often.

While in Wick, we also stopped for ice cream at Marshfield Farms, purveyors of fine ice cream.  There were some unique flavors to choose from, and I had Cherry and White Chocolate Chunk in a gluten free waffle cone!

Sandy
Posted by Sandy and Cathy at 9:45 AM