The next stop on our tour of Italy was the fabulous island of Capri.  Our tour book snarkily said that tourists flock to Capri looking for the rich and famous, finding only their prices.  There's probably some truth to that, but the other side of the island -- Anacapri -- is surprisingly affordable by comparison, and far more down-to-earth.

Our hotel, in Anacapri, was the Hotel Girisole.  They did not have a restaurant but they did have a free breakfast buffet.  It was your typical European breakfast with pastries, coffee, lunch meats and cheese.  I had yogurt.

Just down the street was the Pizzeria Aumm Aumm where the staff could not have been more friendly.  They were open to eat in the middle of the afternoon (3 pm), which is pretty much unheard of in Italy.  We were famished and enormously grateful that they would feed us.

They had both gluten free pizza and pasta available, and I chose pizza.  The crust was... gluten free.  Not great, but I've had worse.  The cheese and sauce were delicious.  My non-GF hubby loved his meal here and we all loved that it was close to the hotel and not terribly expensive. 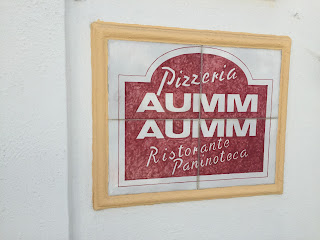 The next day, we took a boat ride around Capri.  Most of the tours leave from the larger Marina Grande, but this one left from Marina Piccola on the other side of the island.

The kids all loved the boat ride.  After it was over, we ate at a restaurant in Marina Piccola called Lo Scoglio delle Sirene.    Stunningly beautiful, it sits on an outcropping of rock with the water on three sides of it.  It is, without a doubt, the prettiest place I have eaten in.  The food gets mixed reviews.  They did have gf pasta available, but I chose to go with a Caprese Salad, a safe but forgettable choice.  The non-seafood eaters were less than impressed with their meals, but those who ordered seafood were in heaven.

Outside the restaurant was a little gelato stand.  In addition to gelato, they sold  ice cream pops (like the kind you get from an ice-cream truck) and the strawberries and cream pop was clearly labeled "senza glutina" on the sign.  Yum!

We also had a meal in the main piazza of Capri at a place called La Palma, which was part of a hotel. We ate outside on the patio and watched the well-heeled tourists go by.  This is the expensive part of the island, and boy did we pay for our location.  Nevertheless, I was happy with my food (a steak with marinara sauce) and they brought me gluten free rolls too!  I foolishly ordered a Torte Caprese, a traditional almond cake native to Capri, even though I was really too full to eat it.  It was delicious, but I pretty much had to be rolled home afterwards.

Sandy
Posted by Sandy and Cathy at 5:58 PM