Our first meal in Switzerland was at Swiss Chuchi ("Swiss Kitchen") conveniently located across the plaza from our hotel (Hotel Wellenburg).  We chose it for convenience, but it turned out to be a great success.  I really wanted cheese fondue, but I asked about it fully expecting to be told  "not for you."  Amazingly, the waiter not only knew what "gluten free" meant, but already knew which fondues I could eat and said he would bring out potatoes instead of bread to dip in the fondue.  What a great idea!  It was absolutely delicious.  The gluten-eating children both ordered veal, which was something new to them.  Colin's was a Cordon Bleu, which he talked about for the rest of the trip.


Our hotel was the Wellenberg, one of the few hotels we stayed in that had a room big enough for four.  I was glad the children were old enough for their own room, as there was a two person limit per room at most hotels.  That first night, however, we were all together.  In the morning, we went down to breakfast, which was included in the (very pricey) room rate.  There were plenty of things for me to eat, including brie, which I ate every morning while we were in Europe.

(For some reason, Google is translating "Hotel Wellenberg" to "Hotel Adler" on the Wellenberg website.  However, they are two different hotels, across the plaza from each other. If you look at the page in German, it does say Wellenberg.)

Next we were off on a train adventure!  We walked to the train station and took the train to the Dolderbahn, a funicular train that goes up the Adlisberg mountain.  At the top is the Dolder Sports Complex, a huge public park with hiking trails, sparkling swimming pools, mini-golf, and even outdoor table tennis!  We hiked for a while, then played a round of mini-golf before heading to our next destination -- lunch at the Dolder Grand hotel.

The Dolder Grand is a 5-star luxury resort overlooking Lake Zurich (known to the locals as Zurichsee).
The lunch we had there was both spectacular and spectacularly expensive.  ($330 for lunch for four.  To be fair, they strongly advised us to have the children order off the kid's menu, but 11-year old Colin turns up his nose at such things.  He wanted to order the Monkfish.)  I had a steak served with asparagus and mixed vegetables.  It was perfectly cooked, one of the best steaks I have ever had.

Dessert was a Moscato flavored caramel custard with nectarines (minus the almond biscott, but garnished with caramelized nuts.)  It was perfect.  The custard was light but creamy, the nectarines were perfectly ripe and the crunch of the nuts contrasted nicely with the soft custard.  I will think of that dessert every time I eat a nectarine from now on.

The food was worth every penny (or Swiss Franc as the case may be), but the service was unbearably slow.  We are not people who like to sit around and linger, and all of the European restaurants drove us crazy with their slow service, but this one was particularly lengthy.  So if you go, plan your time accordingly.

We returned to our hotel for a nap.  Well, Colin and I napped.  My husband and daughter went out and saw Grossmunster church, built in 1487.  As Americans, it is hard for us to conceive of anything that old.  The Europeans hadn't even "discovered" the Americas yet; and here in Texas, "old" means nineteenth century.  Upon their return, we walked around Old Town Zurich for a while before heading off to dinner at Au Gratin. 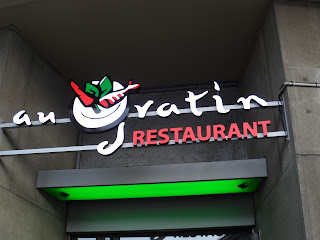 Gluten-free items are clearly marked on the menu and they had menus available in English. Technically, an au gratin is any dish baked with a topping of seasoned breadcrumbs and cheese.  However, many of the gratins here did not ordinarily come with breadcrumbs and so were gluten free "as is."  I had the "France Gratin" with basil, zucchini, tomatoes, and mozzarella.  (Sounds more Italian than French to me, but then again, French Fries aren't particularly French either.)  Either way, it was a hearty and delicious meal.

The next morning, we had breakfast in the hotel again, then headed on to Germany.